All of Kevin's programs are available for online (virtual) delivery.

How To Motivate Employees To Buy-In To Safety

In safety, there is a mistaken belief that in order to motivate employees to buy-in to safety, you have to “go negative.” 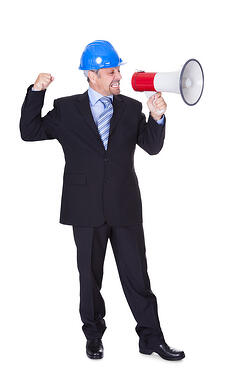 After delivering a keynote presentation at a safety meeting of electrical linemen, I ended up chatting with Don, a veteran of electrical installs. At one point, Don made a laughing reference to the fact that he had lost his right thumb in a farm accident many years before.

“Stupid and 19,” was his resigned reply.

And that was all he had to say about the loss of his thumb. Don didn’t take an hour to tell some horrific story. He didn’t offer up a sermon of “don’t do what I did” by drawing out some awful gut-wrenching story. He didn’t set up a series of PowerPoint slides as a photographic documentation of the day he lost his thumb. He didn’t turn his accident into some horrific experience to attempt to convince me that I must choose safety or else.

To which I joked, “And you knew everything right.”

He burst out laughing nodding in the affirmative.

Safety Managers Are Not Motivational Experts

In safety, there is a mistaken belief that in order to get people to buy-in to safety, you have to “go negative.” Any safety manager that believes this to be true is simply not well-versed in human motivation. They are not familiar with the subtle nuances of what people do when they are exposed to a negative messages versus what actions they will take in reaction to a positive message. Somehow putting the fear of God into employees is thought to be a great motivator. But that is simply wrong.

“Motivation by fear produces very short term results and talent leaves quickly when they can. Fear does motivate, but not in a positive way,” according to John Bossong, General Manager of Cumberland International Trucks in Murfreesboro, Tennessee. “Great leaders create a culture built on intrinsic motivators. When people know their work matters, that’s their motivation. They don’t need fear.”

Shawn Galloway, President of ProAct Safety puts it this way: "While fear might work to move an organization from dismal in safety performance to average, it is the most ineffective approach to achieve and sustain excellence in culture and performance."

Avoiding Failure Is Not A Motivator

What if Sales was focused on avoiding a glut in sales or if Finance simply avoided being broke? The work in safety should not be on avoiding a worst-case scenario - the focus should be on laying out a strategy for being better and more successful.

Avoiding failure is not memorable nor is it terribly motivating. In fact, trying to outrun failure is exhausting - take living from paycheck to paycheck as an example. Trying to stay one step ahead of creditors is debilitating.

Broke people don’t get invited to tell their sad stories of bankruptcy at meetings of financial planners. Fat people don’t get to offer their “don’t do what I did” advice to fitness trainers. People don’t want to know what NOT to do. They want a plan and strategy for success - one that builds on strengths and teamwork - not negativity and fear. What organization ever got to be great by being focused on the negative?

Stop exposing your people to negative stories, gruesome photos and emotional videos of the families of victims of workplace accidents. It doesn’t work in the long-term. No one ever chose safety because they watched a video. People choose safety as a personal value when they value themselves and feel valued by the people they work with.

People are more willing to care about themselves when they know they are cared about. As the saying goes, people want to know you care, before they care about what you know. They won’t listen if they don’t think you care first. Get personal. Build safety on strengths. Make safety sexy - not negative. People will buy sexy. They won’t buy negative.

If you want some help with turning your next safety meeting wildly positive and fun (honestly, who ever says “Wow, that safety meeting was fun?”), call me and let’s start a conversation. Making safety fun is what I do.

Ready to hire a safety speaker? Here's what you need to know before you pick up the phone: 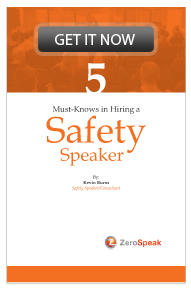