Solid and effective safety leaders make people proud of who they work with and inspire them to want to be better. I watched a firefighter tear up at being called a hero this week. Then, he displayed class and leadership in his response. And I was captivated and engaged and proud … and I don’t even know him.

The Fort McMurray wildfire brought out the best in so many. It continues to do so. Captain Adam Budgen of the Fort McMurray Fire Department, after being asked in a TV interview about how he feels about being called a hero, responded to the question.

“I don’t consider myself a hero. But I’ve met more heroes in this experience than I ever thought existed. (Pause to wipe his eyes) Our community right now has more firefighters and more first responders, police, everybody, that have given up their own homes (in other communities) that are safe, their own families that are waiting for them, to come up (to Fort McMurray) in the middle of this beast to help protect my home. They’re heroes to me. (Pause to wipe his eyes) Everybody I work with has been holding me up and I’ve been holding them up. So I am in the company of heroes.”

There are just some inspiring moments in the deepest, darkest adversity. That thirty-seconds of sound bite provided reflection. There are three compelling things that leaders, including safety leaders, do to get results:

1Leaders feel. Good people, real people are connected to the people they work with and the work they do. Leaders know and feel that every person is a part of the team. Leading has to be personal. There has to be a personal connection to the work and the people. Leaders know that when adversity strikes, they can depend on their team. You can’t be disconnected from your team and expect to be able to inspire them, to care for them or to be able to lift them up when they need to be lifted. There’s an emotional involvement. When a team member gets hurt, leaders take it personally. When a team member succeeds, a leader takes that personally too. They are proud. They genuinely care. The leader has the team’s backs and he/she knows that the team has his/hers. And like every other member of the team, leaders hurt too. They feel. It’s part of their make-up. They don’t try to hide their vulnerable parts in order to look like they are in command. That’s not leadership.

2Leaders give. They especially give of themselves when someone else needs their help. Hundreds of firefighters were on standby ready to travel from their own homes to help fight the Fort McMurray wildfire. When someone else is in trouble, leaders give of themselves. And they don’t think twice about it. When things go well, there's a tendency to give the leader credit for the success. Leaders will, in turn, give the credit to the team who did the work and carried out the job. Leaders will deflect any notion that "they could not have done it without me." Instead, leaders are absolutely certain to genuinely give consideration to all who made it possible. Leaders are genuine. And they know that acting humble and being humble are not the same thing. Leaders give the credit to others and it generates greater long terms results.

3Leaders lead. Theirs may be the face of the team but they know that every team member plays an important role. Leaders genuinely like their work and the people they do that work with. Liking what they do makes it easy for successful leaders to create a positive and inspiring workplace culture. They set the tone and bring that positive attitude that motivates their colleagues to take action. Because of this, effective leaders are liked and respected. And a solid leader would never ask someone to do something that they, as leader, weren’t prepared to do first. So they roll up their sleeves and dive right in with their team. Leaders don't take the lead for the sake of power. They do it for the meaningful impact they can create. 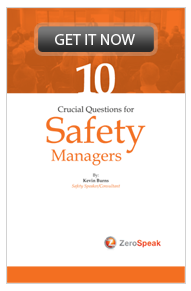 It seems counter-intuitive, but the less you show your real self, the less likely you are to become an exceptional safety leader. It’s the soft parts of your personality, the vulnerabilities, that take real strength to allow to peek through. It’s those little things that inspire others to want to be better and give more of themselves.

People genuinely matter. Solid and effective leaders make people proud of who they work with and inspire them to want to be better. They usually do it by allowing themselves to be seen for who they really are. I will always be inspired by Captain Adam Budgen. I am sure his team members have his back.

Kevin Burns gives engaging, entertaining and inspiring speeches to front-line employees at safety meetings. He also works with supervisors and safety managers on-site or in keynote presentations at conferences. He is an expert in how to get through to people. Kevin helps organizations integrate caring for and valuing employees through their safety programs. Kevin Burns is a management consultant, safety speaker and author of "The Perfect Safety Meeting" and "Running With Scissors - 10 Reasons To Invest in Safety In Slow Times."