Lack of engagement is a problem in every corner of every organization. Safety has called this problem complacency. Engagement is the biggest problem in the workplace today. The Gallup surveys tell us that 71% of employees are NOT actively engaged. You would think that a 71% level of disengagement would be cause for grave concern for companies. After all, poor safety performance and lost productivity creates a huge financial mess. Companies pay more and get less.

You'd think that there would be a hue-and-cry from companies to find solutions. But there isn't.

It's apparently still not painful enough. If it were painful enough, companies would be doing something about it. But they're not and here's why: because it's an "employee" engagement problem. It's terribly named as though it's all the employees' fault. But employees will only engage in the work if they are engaged by the work. People engage in direct proportion to the level in which they are engaged by their managers and supervisors. Poor engagement from a direct supervisor signals that minimal engagement is “good enough.”

Lack of engagement is a problem in every corner of every organization. Safety has called this problem complacency. For engagement levels to rise, there has to be a rise in engaging workplaces, safety meetings and the valuing of employees. People who are engaged in their work tend to make better choices in safety. They pay attention to the work. And more importantly, they pay attention to safely doing the work.

Here are three ways you can begin to shift the level of focused attention on safety with your crews and employee teams:

1Give daily feedback. Archaic annual performance reviews no longer work they way they used to. Annual reviews to address engagement with a workforce that requires daily feedback is counterproductive. Look at the example of social media. People like Facebook because someone is engaging them there several times per day. People like to be engaged in that which they do. Use the Facebook model as a model of how often to give feedback. At least once per day, connect with each member of your team. And focus more on what they are doing well instead of what they’re doing wrong. Rarely are there criticisms of friends on Facebook. Mostly, it’s positive. That’s why people keep going back.

2Update employee engagement surveys. Anonymous corporate surveys are not terribly engaging. Here’s why. The information is collected anonymously and then pored over in secret back rooms. A small group of people will determine the direction for a large employee base. Disengaged employees believe that their employers are giving the illusion of actually listening. (Kudos to the companies that do actually listen). Asking their opinion on what is wrong but not on how to fix it misses the engagement opportunity. It’s here where you could be doing a better job of engaging employees. People will take ownership of that which they had a hand in creating. Why not simply ask front-line employees to solve the problems they're supposedly creating? Get HR personnel out into the field attending safety toolbox and tailgate meetings. Have them ask questions. Ask for solutions. Do it face-to-face. People don’t engage with surveys. They engage with other people. Record the information. Engage to get engagement. Ask employees to offer feedback and you will get an earful of ideas.

3Make them top performers. A star employee is usually treated like a valued member of the team. But the question is, how many of your people are star employees? This might be a trick question. If only a handful of your people are considered top performers, take a closer look at the coach. It might be time to reconsider your willingness to invest yourself in making employees better. Get busy increasing their abilities. Give your people the chance to become top performers. That means you are going to have invest yourself in personally helping them improve. When they do, they will engage better. Coach them like they’re already a championship team. They will perform like champions. That includes making safety one of their guiding principles. 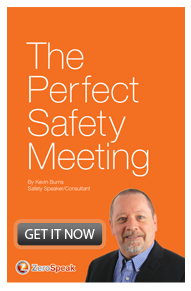 One final thought; there is little reward in enforcing rules for safety. There is tremendous reward in helping others to become valued members of a winning and highly-engaged team. The team is only going to perform as well as the coach. Engage your team and they will engage themselves. Safety included.

There are many ideas and strategies for doing a better job of engaging employees especially in safety meetings. Download your free copy of The Perfect Safety Meeting for more.