"Be Safe" Is A Terrible Safety Message

Safety people and supervisors get concerned when their employees won't buy-in to safety. They also complain about employees' lack of engagement and a lack of accountability in the safety program. But what if the safety messaging is aimed below the intellect of the same people you're trying to reach? What if you've dumbed it down too far? What if you've underestimated your own people?

Communications that miss the target can undermine your efforts in safety. Generic slogans and feeble safety campaigns downloaded from the Internet do not resonate with most people (Hint: there's a reason they're free for the taking on the Internet). And people do not connect with anything that doesn't resonate with them. A slogan for a slogan’s sake can do more harm than good.

Generic safety messages are like an ill-fitting suit. Buy a suit off the rack and it looks like a cheap attempt to dress-up. But go to a tailor and have one built specifically for youy and you are willing to wear it proudly. The same too with a safety message. It has to fit perfectly, or your people won't wear it.

Unfortunatley, safety has, historically, been something that was added to the job. In an effort to help safety get as much attention as production, short slogans and mnemonics were used to try to make safety easily digestible. So, "cutesy" was employed as a way of trying to ear-worm safety into the heads of employees. But then the landscape became littered with cutesy safety slogan that were, many times, laughable. And many of these slogans cemented safety as an add-on; a thing you do to the job and not a guiding principle for one's life.

Is it any wonder that adults have a tough time buying into safety slogans that look like they were ripped from the pages of Dr. Suess books? How are people supposed to responsibly buy-in to something that looks so juvenile? Have a look at how many of the following safety messages remind you of The Cat In the Hat or There's a Wocket In My Pocket:

A spill. A slip. A hospital trip.
Safety is gainful. Accident is painful.
Stay alert. Don't get hurt.
Your head will go splat without your hard hat.
10 fingers. 10 toes. If you are not safe - who knows?

What Nike Can Teach Us About Safety

Just Do ItⓇ is Nike's message. They own it. They promote it. They have built their brand around it. Anyone dares to use their slogan and the army of lawyers come down hard on them. Nike owns Just Do ItⓇ. But Be Safe is no one's message. No one owns it. No one has a bevy of lawyers who, to the death, protect it. So, if it belongs to no one, how can there be ownership of the message? How can you expect your people to buy-in to a message that you or your company don't even own?

Safety people who ask their crews to be safe may as well tell them to be a Ph. D or be an astronaut for all the good it will do (unless of course the crews already are astronauts and then, well, that's different). Be Safe is an incomplete set of instructions because you have to DO something before you can BE something.

Do Not Forget The Action Part

Your safety record is the result of a series of individual decisions and actions all lining up. One decision could have changed everything. You don't just be safe each day. You DO safe things and make good decisions day after day.

Safety Buy-in Through Decisions And Actions

Be Safe gives the indication that you can turn it on or off on command. But you don't want your people to just be safe. You want them to act safely, to watch the backs of their fellow workers, to take safety home and impart the ideals of safety to their families. In other words, you want your people to buy-in to safety through their decisions and actions. 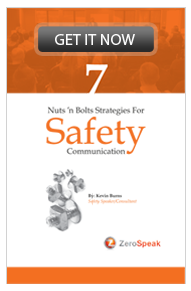 If the challenge is to be safe, then the nobody moves - nobody gets hurt philosophy is the fastest way to get there. But that's not what you want. You don't want them to BE safe. You want them to act safe, to choose safe, to embrace safety and to make the smart decisions for the betterment of themselves and their co-workers. Be Safe may be familiar, but it is impossible to do and not very well thought out.

As a supervisor or safety person, it is imperative that you understand the power that your communications have. You have got to ensure that the things you say and communicate with your people move them to taking a positive action that gets a positive outcome. Flippantly throwing about phrases like be safe don't accomplish that. And they lessen the importance of affecting people at a personal level.

If you're looking for a few other ideas to improve safety communication and buy-in with your people, PeopleWork: The Human Touch in Workplace Safety has two full chapters on safety marketing and communication - including "How To Build A Successful Safety Marketing Campaign."